A Guy Walks Out of the Psychiatrist's Office

This post is about the climax to 'The Sopranos' and will wreck your enjoyment if you have not yet watched it.


The edition of ‘The Commercial Appeal’, a Memphis daily, printed on 17/08/77, had a headline, “‘Are you sure there’s no mistake?’
– The Desired Answer Never Came.”

30 years ago, the reaction to the death of ‘The King’ was similar to the audience’s response to the climax of ‘The Sopranos’. Its final episode, ‘Made In America’, provided no gift-wrapped resolution and provoked a range of emotional responses from viewers. At first, shock and disbelief reigned. Some threatened to cancel their subscription to HBO, the cable company that had provided their Sunday ritual of family belonging.

Things like the end of important TV shows or the death of rock gods should not happen like this. Tony, like Elvis, was, ‘the sort of god the public wants today. He was overweight, he dressed out of date and he took too many prescription drugs, just like us.’ The end left us, in the words of Soprano crew member Paulie Walnuts, ‘halfway up the ass’.

The previous episode, ‘The Blue Comet’, featured an escalation of the war between Jersey and New York. It ended with Tony holed up in a safe house, gun by his side, trying to fall asleep on an uncovered mattress. Seemingly, some kind of catharsis beckoned.

‘Made In America’ brilliantly continued the tension. Tony, the family-oriented everyman, fills the frame, sleeping, looking like he’s dead. His day begins, like it does for most of us: bleary-eyed, momentarily confused and irritated by media intrusion. The difference, and the dramatic imperative, provided by the bedside instrument of death. The scene evoked Lester Burnham’s comment in ‘American Beauty’, “Remember those posters that said, ‘Today is the first day of the rest of your life?’ Well, that’s true of every day except one. The day you die.”

It was the springboard for 60 minutes of anticipation, paranoia and suspense. Throughout, the creator, David Chase, manipulated the audience and played with its studio-led perceptions of a series finale. The first major scene was a tense, delayed meeting at an airport, which featured an image of Tony, caught in headlights, looking vulnerable. FBI Agent Harris had been responding to a false alarm, a recurrent theme throughout the episode.

We’d been set-up to believe Tony might be killed by one of his own men, an informer for the FBI, a rat. Instead, the scene in the safe-house just had a comment about a stray cat killing a mouse in the cellar. Tony’s depressed son, AJ, fresh out of a suicide treatment centre, parks his SUV on some leaves that are set alight by the heat of the vehicle. Smoke creeps into the car, just as he is about to have sex with his girlfriend. They survive but the SUV explodes, its CD player choked on Dylan singing, ‘Life goes on all around you’.

The mob war between Jersey and New York is resolved without major escalation - there is hardly a raised voice at the sit-down. Later, there is a scene of great tension as Paulie arrives at the strip-club to meet a henchman, Carlo, and we expect blood to spill. Instead, the finger on the trigger becomes the thumb on the phone.

And so it goes on. The crew’s lawyer, Mink, tries to cover his burger with ketchup. Frustrated by his attorney’s clapping noises, Tony tries his hand, but has to throw the bottle away in disgust. Even he couldn’t supply the free flowing red stuff.

So, after fifty five minutes of confusion and misdirection, we are led to the final scene, following Tony as he enters the ice cream parlour. It’s five minutes of brilliantly sustained tension and paranoia.

For a peerless breakdown of the scene’s symbolism, I strongly recommend this excellent post by Bob Harris. It is an extremely thorough analysis of the events and his construction is faultless. He provides a step by step explanation as to why it points to death and a funeral. He begins with the comment from an earlier episode, by Bobby Baccalieri, Tony’s brother-in-law, ‘you probably don’t even hear it when it happens’.

He then mentions the framing of the shot that references ‘The Last Supper’. He also points out that from the moment the guy in the ‘Member’s Only’ jacket (‘when you put it on, something happens’) enters the parlour Chase frequently has him in the frame. The jacket’s trip to the bathroom is a reference to ‘The Godfather’ and the film’s ‘Sollozo’ murder was Tony’s favourite scene.

Bob makes plenty of other points, all valid, that illustrate Chase was foretelling death. My favourite is the onion rings: they are eaten like communion wafers. Whilst in no way denying that many indicators could point to Tony’s death, most of the scenes throughout the episode did not reach the obvious conclusion.

I appreciate David Chase has said, of the climax:

‘Anybody who wants to watch it, it's all there’,

which strongly suggests a definite ending.

However, he has also said:

‘I don’t think art should give answers. I think art should only raise questions, a lot of which may be even dissonant and you don’t even know you’re being asked a question, but that it creates some kind of tension inside you’.

Admittedly, although extremely appropriate for his show’s climax, it was not a direct reference to 'The Sopranos'. This, however, is:

‘This is what Hollywood has done to America. Do you have to have closure on every little thing? Isn't there any mystery in the world? In life, you don't get an ending to every story. You can't tie a little ribbon on everything and say it's over. And yeah, I know...'The Sopranos isn't life.' But it's based on it!'

The series has always reflected American life, so it is appropriate, during a time, ‘where people might be terrorists, or they could be pistachio salesmen’, there is an uncertain ending to the show. To conclude that Tony is popped is to neglect the possibility he looks up and sees Meadow, his daughter. In its final moment, Chase gives us the dominant theme of The Sopranos (and all great art): love and death. To have a debate about which interpretation is more valid is as inappropriate as unleashing an Alsatian in a graveyard.

The last five minutes does suggest death, but I think it is the audience who is 86-ed. It is our time that is over. It also highlights our dependency on television. Even for a show that frequently features characters passively watching screens, ‘Made in America’, has an abundance of scenes depicting people gawping at images.

It has: a monitor showing Bobby Baccalieri’s tombstone; Tony’s crew killing time with ‘The Twilight Zone’; Agent Harris absorbing a broadcast about fundamentalism; Mink peeping at the strippers displayed on the monitors at the ‘Bing’; a screen depicting a heart beat; Tony sees ‘Little Miss Sunshine’; and finally AJ, (‘He used to just veg in front of that TV’) seemingly cured of his depression by watching an explosion, laughing at the dancing Bush. We are constantly reminded of the presence of screens and passive experiences.

We were the tourists on the bus leaving Little Italy. We, like New York mobster, Butch, found ourselves, confused, in Chinatown, wondering where our world has gone. He turns back. We cannot. For ten seconds, we are the cat, transfixed, looking at a screen of death. Chase cut off our life support. We didn’t hear it when it happened.

Desperate, in a shocked state, we found ourselves, (like the characters throughout 'The Sopranos') in denial, trying to create more bearable alternatives: ‘I saw the Meadow ending. It may as well be ‘ELVIS LIVES!’. Jolted out of existence, we expected answers from the puppet-master. Many found themselves at the Pearly Gates of the HBO web-site, clamouring for information, crashing it in the process, learning only that the American creator was not there, he was not in heaven.

He was in France.

Chase has argued that network TV drama is like religion: it offers the same message every week and people find that reassuring. The ending of 'The Sopranos' removes that comfort zone and pops the viewers’ belief system. We will not always be reassured by life, or our philosophies or, shock, our TVs.

Even Bart Simpson realised this:

‘If TV has taught me anything, it’s that miracles always happen to poor kids at Christmas.’ [Later] ‘It seems impossible, but I guess TV has betrayed me.’

With the prevalence of TV sets, it is impossible not to sympathise with Bart. As Michael Bywater puts it in his book, ‘Big Babies, Or Why Can’t We Just Grow Up?’,
‘There is television in taxis now because our minds need to be distracted from being in a taxi, in the world, in the street. And we can’t turn it off. There is no way to turn it off.’

David Chase did turn it off. By ending our existence in 'The Sopranos', he challenged our faith in conventional narrative, our expectation that ‘this is how things are’. Sometimes, the desired answer does not come. It doesn’t matter whether we believe in this: 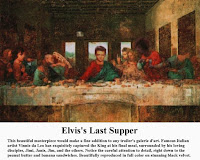 there will always be uncertainty. We can only count on death. We left 'The Sopranos' as we will probably leave this earth: wanting more and never knowing, specifically, what happens next. We spent time with a family, we loved them, we were annoyed by them, they made us laugh, they shocked us, but most of the time we were comfortable in their company. Now we are left ‘in a lonely place’.

We had family. Redefined. Now we just have

Jeremiad1971
Pro poker player wants to share thoughts about the game and the world in general.